The series begins with the Hart Family (Reba, Brock, Cheyenne, Kyra, and Jake) are in court-ordered therapy. As the story unfolds, Reba and Brock reveal that they are separated due to Brock's midlife crisis and while in court the entire family got into what the judge described as a brawl.

While in therapy, Brock reveals that he will not be moving back home because he has to marry his dental hygienist/assistant Barbra Jean because she was pregnant. Jake confused, says that 17-year-old Cheyenne is pregnant as well.

Reba and Brock have a firm talk with Cheyenne and her boyfriend Van Montgomery about how she could have gotten pregnant, and told them why did not listen and obey them about not having sex.

Later, Van proposes to her right in front of Reba. Reba organizes a shotgun wedding while trying to keep Barbra Jean at a safe distance.

Van's parents will not come to the wedding and have kicked him out of the house, but on the bright side, he managed to arrange a honeymoon at his uncle's beach house in Galveston.

On the wedding day, Cheyenne is upset that Brock hasn't arrived yet. Reba starts to lose it when she burns some of the food. Brock arrives with Barbra Jean. Cheyenne and Van get into an argument because Van plans to play football on their wedding night. Things are thrown and Barbra Jean falls into the cake.

Reba finally loses it, shouting at everyone. Reba gives Cheyenne a pep talk about facing reality and plotting a new course. Cheyenne asks Reba if she can wear her wedding dress instead of the sexy dress she had planned on. In the end, Cheyenne & Van get married.

Jake: I wanna stay with Mom.
Cheyenne: I want to go with Dad.
Kyra: Is boot camp an option?

Brock (about Barbra Jean): Reba, I have to marry her!
Reba: Have to? The only reason you'd have to marry her is... Oh my god.
Cheyenne: Dad! How could you!?
Jake: What?
Kyra: Barbra Jean's pregnant!
Jake: I thought Cheyenne was pregnant!
Cheyenne: Shut up, Jake!
Kyra: Back off. He's just a stupid kid.
Jake: I'm not stupid. She left the pregnancy test in the trash can.

Kyra: Don't worry, Mom. I know all about birth control.
Reba: Oh really? And what age is it appropriate for a young lady to become sexually active?
Kyra: Forty.
Reba: Have I mentioned you're my favorite?

Reba: Why is it we're the only family in Texas without a gun?

Cheyenne: Getting married is so much fun! We should have done this in our junior year!
Reba: No, honey. You were smart to wait.

Brock: Reba what is this? Cheyenne is not getting married. I'm not going to stand by and let my daughter throw her life away for that punk.

Reba: You love that punk.

Reba: You watch him play football every weekend just like he's your own son. Sometimes I think you like him more than you own son. 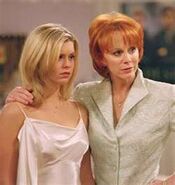 Add a photo to this gallery
Retrieved from "https://reba.fandom.com/wiki/Pilot?oldid=6430"
Community content is available under CC-BY-SA unless otherwise noted.